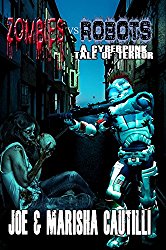 My published works are co-authoring a zombie  quadrilogy with my dad called “Zombies vs. Robots”.  The first two books of the series have been re-released by JEA Press and I expect the last two to be out later this year.  We love working with our JEA team. They are a wonderful small press to work with. In addition, I also co-authored several purely cyberpunk novels which were accepted by JEA Press and are waiting publication. The first is “Red Light Falling” and the second is “Cyborgs, Symbiont, Citadels, and Sorrow.” These books were done with Johnny Andrews, who also writes poetry and zombie novels. My dad and I also co-authored one Dreampunk Novel with my dad and Adri Lemke that is accepted and waiting publication called “Soul Warriors vs Witches.”  This was also accepted by JEA Pres and is waiting publication.

We finished two cyberpunk novella that are under review with Indie Author Press. They are The Source and Mechanical Error. Mechanical Error also contains a short story that my dad and I worked on with Roma Gray.

I am writing a novel currently called “Dream Defenders: A Warrior’s Tale” where I am lead author and The Mercury Project. I also will be publishing some short stories in the meantime. We have published a few short stories in some charity anthology series. One was in Bite Sized Zombie Offerings and I co-authored about five in and anthology titled When Disaster Strike.  I also published a solo-one in a series titled Tales by the Camp Fire.

That I have passion for everything I do and that I just need to be reminded of it once in a while.

Yes and no. Yes, because I write from the heart and no because I want to be known for my other things, not just for my ability to craft stories. I play guitar, swim and draw.

When I went to Canada last year with my parents. Though it only lasted a week, my parents and I saw so many things that we won’t forget.

I would be as prepared as I could be.

Food/water, medicine, and a means of communication.

I would definitely say any innovations in medicine or technology.  I think that in life we take for grant little things like eye glasses to see or heat to get us through the winter. This would all be gone.

I started writing with my dad at age six and now I am eleven. I voiced the survival tips on youtube for the Zombies vs Robots series at nine.

Outside of writing in swimming, I am two seconds away from Junior Olympics in the 50-meter freestyle.

Valerie Lioudis is the co-author of Aftershock: A Collection of Survivors Tales available on Amazon.